Will FTM Patients Still Get Their Menstrual Cycle? 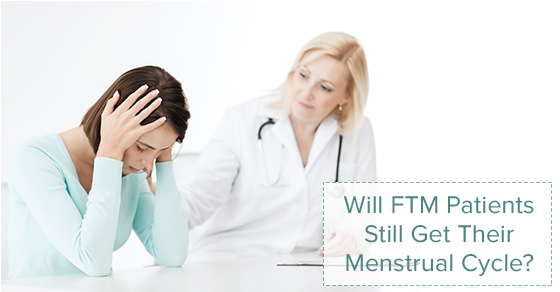 There are 3 types of procedures that will interfere with the production of the hormones necessary to ovulate and shed the uterine lining.The menstrual cycle involves the maturation of an egg which is released from the ovaries. The egg travels down the fallopian tube, which is where the egg might encounter sperm during fertilization. At this time, the uterine wall thickens to provide nutrition in case an embryo develops. If the egg remains unfertilized, then it and the walls of the uterus is shed along with other menstrual fluids, including blood.While we concentrate only on FTM top surgery, what’s commonly called ‘bottom’ surgery in female-to-male transitions is done for a number of reasons, and is important to the overall FTM transition process for many patients. A health benefit of removing reproductive organs is to prevent ovarian or cervical cancer, and those concerns support the decision to perform the procedures oophorectomy, hysterectomy, or endometrial ablation:

Endometrial ablation can be done using very cold or very hot instruments. Waves above microwave frequencies (or high-energy radiofrequency) can also do the job.

‍Testosterone actually plays a role during the menstrual cycle -- it is converted into estrogen which facilitates the rebuilding of the uterine wall, and in fact, an insufficient level of estrogen may lead to thin uterine walls. The conversion process is called aromatase, and it also uses progesterone to create estrogen, as well.Once testosterone exceeds a certain level, it causes irregularities, such as the suppression of ovulation, as found in some cases of polycystic ovary syndrome (PCOS). Within the first few months of hormone therapy, most patients will stop having their period, and the longer the amount of time spent undergoing hormone therapy, the less likely menstruation returns even if therapy stops.Although it is possible to have a period after transitioning, it’s not always the case.