Why Transgender Identity Is Not A Mental Illness 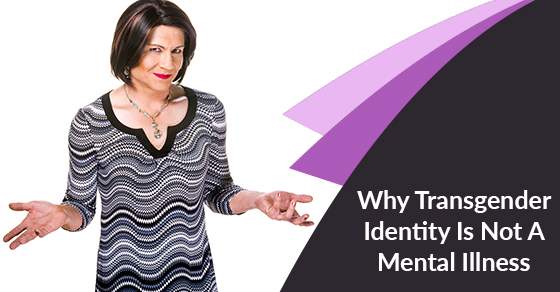 What is mental illness?

Mental illness is defined as encompassing a wide range of health conditions that affect mood, behavior and thinking. If you suffer from a mental illness, you may find it keeps you from performing everyday tasks and causes so much stress that it hinders your ability to function. People who suffer from mental illness often find comfort in psychologist-administered therapy and/or medications like antidepressants. Examples of mental illness would be depression, anxiety disorders, schizophrenia, bipolar disorder, eating disorders and addictive behaviours like gambling. Having a transgender identity, undergoing an FTM procedure and anything else associated with being trans have no correlation with mental illness. Although you may feel depressed or distressed about your identity, it does not mean that you are mentally ill. There is already a stigma surrounding trans identities, and breaking that stigma is an ongoing fight. “Transgender” refers to those whose gender identity, expression or behavior doesn’t conform to what is typically associated with the sex they were assigned from birth. Wanting to live as your true self in a body that makes sense to you does not make you mentally ill. Mental illnesses are often caused by chemical imbalances in the brain, whereas being trans has nothing to do with that.

At the start of 2017, Denmark became the first country to remove the classification of “mentally ill” from trans identities. Danish parliament felt it necessary to remove the stigma associated with being trans and suffering from a mental illness. The two are not interchangeable, and undergoing or wanting to undergo an FTM procedure doesn’t make someone mentally ill. This move by the Danish government to destigmatize those that are transgender by separating them from words like “disorder,” “dysphoria” and “problem” will hopefully pave the way for other countries to do the same. If you are mentally ill, it has nothing to do with being trans. Remember that you are not alone and there are support groups and people out there you can talk to. Please do not hesitate to contact us even if you’re not ready to have an FTM procedure or don’t plan on having one. We can recommend resources to help you in your time of need. You deserve to be your true self.