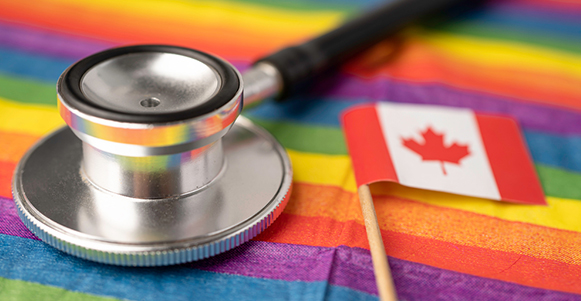 Despite being one of the most progressive countries in the world on gay and transgender rights, the hurdles of transgender healthcare access in Canada remain a leading cause of activism for its community members.

According to a 2020 report by Trans PULSE, more than 80% of trans and non-binary respondents said they have a primary care provider, however, 45% of them revealed that they'd experienced having one or more unmet health care needs within the past year. It's a stark contrast to only 4% of the general population reported having unmet medical needs in 2015 to 2016.

What Kind of Specialized Health Care is Needed?

Trans people require access to specialized healthcare services to address their unique and more pressing concerns, such as:

Access to transgender health care in Canada differs from province to province. However, there are still evident barriers at the national level that can have a huge impact if the relevant people were to take the necessary action. Presently, Canadian provinces and territories provide public funding for medically essential gender-confirming procedures for transgender people.

The 2018 national scan by UFCW Canada, the country's private-sector union, and the Canadian Professional Association for Transgender Health (CPATH) compiled a list of the transition-related procedures offered in each province and territory.

Here's what we found:

In 2019, transgender surgery assessments were made available in the province. Meaning, the province no longer requires trans and non-binary individuals to be evaluated by the Centre for Addiction and Mental Health in Toronto, Ontario, to determine whether they would be approved to undergo gender reassignment surgery.

On the other hand, sources show that although appointments to see primary-care providers are covered in the Northwest Territories and Nunavut, the assessment for hormone replacement therapy and other transition-related surgeries and treatments are not covered.

What Are the Potential Barriers?

Unfortunately, despite strides in the right direction, there are still solid barriers to getting full access to transgender health care in Canada.

Sources suggest that transgender individuals under-utilize or intentionally avoid healthcare services altogether. The Trans PULSE survey revealed that at least 12% of trans and non-binary respondents said they avoided going to the emergency room in the past year when they needed care, simply because they were trans.

There are several contributing factors to what truly prevents them from getting the treatment they need. Based on a 2013 study, trans people in Canada and the United States report high levels of violence, harassment, and discrimination when seeking stable housing, employment, health or social services.

In the last five years, the Trans PULSE report also shows that respondents experienced abuse and harassment related to their gender identity in the forms of:

Beyond the lack of transgender-specific health care policies in some provinces in Canada, we can say the fear of being harassed, discriminated against, or outed in a public setting played a pivotal role in why the LGBTQ+ population is hesitant to go to state-funded clinics or hospitals.

Access to state-funded transgender healthcare in Canada becomes much more critical in light of the fact that bisexual and trans people are over-represented among low-income Canadian households. It means they do not have the financial resources to pay for private clinics, which offer a more comprehensive range of LGBTQ-specific treatment services.

An Ontario-based study found that half of trans individuals live on less than $15,000 a year in 2010. A decade after, the 2020 Trans PULSE survey still paints the same picture for the LGBTQ+ community. Most of the respondents were highly educated, with 50% saying they had a college or university degree and 19% having a graduate or professional degree. At least 43% reported having full-time employment. Still, more than half of the respondents aged 25 and up stated they had a personal annual income of less than $30,000.

The Price of Waiting

Based on the VICE documentary, 30% of the annual suicide attempt rate among trans people were those who seriously considered suicide if they were made to wait for gender-affirming surgery. The risk drops to 11% if they are given access to a full medical transition.

These figures powerfully illustrate that although a lot of progress has been made to improve transgender health care in Canada, more work needs to be done to give each and every person in the LGBTQ+ community complete access to timely treatment services.

For more information on FTM/N top surgery and other gender-affirming surgeries, don't hesitate to reach out to us. A friendly member of our team will be more than happy to answer your questions.