What Is Transgender Conversion Therapy? 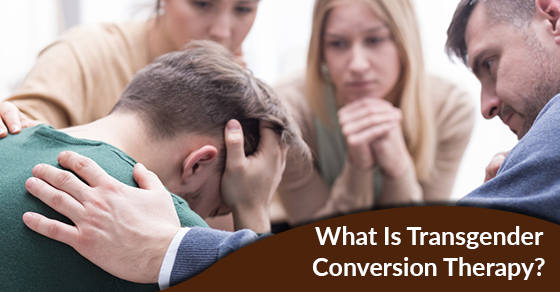 At birth, we are assigned a sex based on our genitalia. For some people, the sex they were assigned at birth does not match how they feel inside. If you are one of those people, you are not alone and there is nothing wrong with you. Many people may try to fight you on this issue and convince you that being trans or wanting gender-affirming surgery is wrong and that the only way for you to be “normal” is through transgender conversion therapy. This is very dangerous.

What is transgender conversion therapy?

Some people believe that being transgender is a disease that has a cure. This false set of beliefs has led to a non-fact-based therapy aimed at turning trans individuals into people that conform to what the dominant idea of “normal” is. In reality, there is no such thing as “normal” when it comes to gender identity. Conversion therapy will not make you suddenly accept the sex you were assigned at birth. Instead, it may cause you to harbour feelings of guilt and create depression and other issues that keep you from being yourself. Moreover, conversion therapy can make you feel ashamed, decrease your self-esteem and promote suicidal ideation. Many mental health professionals (psychologists, psychiatrists, social workers and physicians) have come out against transgender conversion therapy in recent years because it causes the patient more harm than good.

Transgender conversion therapy is often done in religious settings. For example, if you grew up in a religious family where the Bible, Torah or other ancient texts are used as everyday guidelines, your family may feel like you would benefit from this type of therapy because you are going against God or whatever higher power you believe in. Unfortunately, many trans individuals feel powerless against their family and undergo this dangerous therapy to appease them.

Being trans is not a crime

In Canada and in most of the rest of the developed world, being trans is not a crime. You are free to be yourself, in whichever way that may be. If you choose to have gender-affirming surgery, that is your right as a human being. If anyone makes you feel less than human or treats you in a discriminatory manner, remember that they are in the wrong, not you. Transgender conversion therapy is dangerous and has been proven to be completely ineffective. There is nothing wrong with you and you deserve to live the way you want whether you have gender-affirming surgery or not.