Is 'Orange Is The New Black' Inspiring Women To Transition? 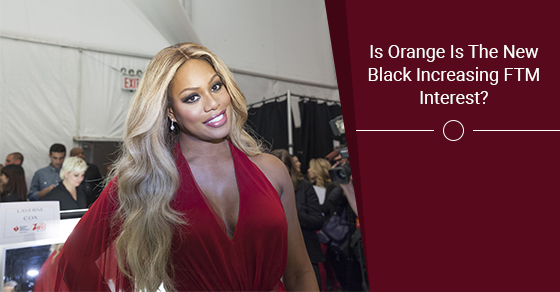 The world is constantly changing, and TV is no exception. Jenji Kohan’s Orange is the New Black, for instance, not only features an almost all-female cast depicting a broad spectrum of sexuality, race, and body types, but also includes a real-life trans lady of colour playing a trans character of colour – something that has never happened before on mainstream TV. This is a unique storyline focusing on the lives of transsexual folks.

The first transgender black woman to have a big role on an American TV show, Laverne Cox, has accomplished a handful of firsts over the past few years from the time the Netflix hit first aired. To begin with, she’s the first transgender individual to be nominated for a prime-time Emmy, and she has even graced the cover of Time under the headline, “The Transgender Tipping Point,” implying that Cox’s success, not only as an actress, but also as an activist, denotes a new acceptance of trans folks.In the show, Sophia Burset (Cox’s character) is portrayed as a multi-dimensional character – devoted spouse, loving parent, hardworking entrepreneur, and compassionate friend. In her role, Cox hopes to help alleviate some of the stigma imposed on transsexuals.In episode 3, viewers got the first glimpse at Burset’s pre-prison and pre-transition, as a father, husband, and firefighter who hides her true identity. This scene is representative of real-life events of transsexuals, who overcompensate in hyper-masculine types of jobs before they transition.Perhaps the most touching scene was in one of Burset’s flashbacks where her female spouse, Crystal, helps her dress in women’s attire for the first time with so much tenderness that anyone can associate with her heartbreak. So many people responded to that scene in particular, including a fan who disclosed that watching Burset on the show helped to mend a conflict between her and her mum.Another major challenge for transsexuals revealed in the show is the inaccessibility of hormone replace therapy (HRT). For Burset, this is a serious issue because she does not produce testosterone naturally following the removal of her testes, and needs to receive hormones externally. The body needs both oestrogen and testosterone in similar ways, lack of which can cause your bones to start deteriorating, leading to osteoporosis and the accompanying hot flashes and mood swings.The show’s female focus and diversity has definitely connected strongly with Netflix subscribers and trans people in particular. While Cox is struggling a bit with being a role model, she hopes to continue inspiring others to chase after their dreams.