Most Important Strides In Trans Rights Made In 2016 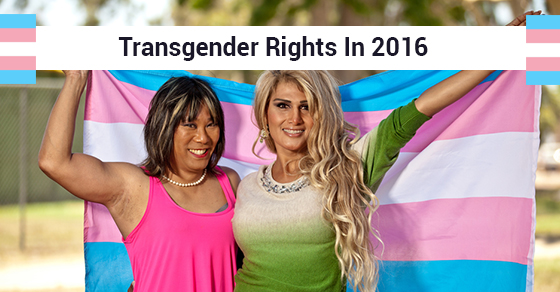 There have been many events that have impacted the conversation around transgender rights. Important strides were made in 2016, giving a louder voice to the transgender community and shedding light on many of the issues they continue to face.

Fundamental rights include equal access to employment, healthcare, education, public services, and legal recognition by government agencies. The following are just some of the strides in trans rights made in 2016.

‍Arguably the most prominent debate related to trans rights was the debate over the use of public restrooms. In the United States, North Carolina and Mississippi passed new legislation that restricted access to public facilities by transgender people. But Massachusetts led the fight against discrimination by passing a new anti-discrimination law that gives transgender people access to public restrooms that are in line with their gender identities. In addition, the U.S. Departments of Education and Justice made decisions that gave individuals the same right under Title IX, which was first established to prevent discrimination based on gender in education. They instructed schools to treat students according to their gender identity. Although this was met with some backlash, it represents an important stride in trans rights that will help to continue to provide equal rights to everyone.

‍The 2016 U.S. Presidential election was watched by the entire world. Transgender rights took its place amid the many issues that were discussed during the campaign season. Hillary Clinton expressed her support for transgender rights by praising President Barack Obama’s actions in protecting the needs of the trans community. She also shared her commitment to protecting these rights and working to end discrimination against transgender citizens.

‍ The American Psychological Association continues to evolve its classification of transgender individuals in its Diagnostic and Statistical Manual of Mental Disorders (DSM). Initially considered a pathological abnormality, gender dysphoria is now viewed as a form of distress caused by social pressures as opposed to a genetic issue. This change provides a new lens with which researchers can observe transgender issues and provide the proper level of compassion and care for those who struggle with their gender identity. These important strides are helping to bring transgender rights and issues to the forefront of the mainstream dialogue. Creating more awareness around transgender issues provides greater resources and assistance to people who are in the process of making the transition.