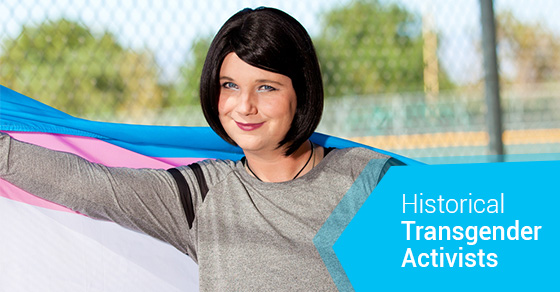 Transgender people are now appearing in mainstream media more than ever before. Their stories help others who struggle with their own transition and give the general public a better understanding of the issues that transgender people face.

Caitlyn Jenner has been the most recognized public transgender figure in recent years. But there are many other important transgender activists throughout history who should be recognized for their roles in paving the way for today’s transgender community.

Jennie June was born as Earl Lind in 1874. She lived in a time when terms like “transgender” did not exist. Jennie June wrote a set of memoirs entitled The Autobiography of an Androgyne and The Female Impersonators. These serve as a historic account of what it was like to live as a transgender person during that time. A third volume was rediscovered and published in 2010.

Billy Tipton was a jazz musician in the United States who was born as Dorothy Lucille Tipton. He lived his life as a man until he died in 1989. He kept his past successfully hidden, and it wasn’t revealed until after his death.

‍Christine Jorgensen publicly shared her story in the 1950s, after returning to the United States from army service in World War II and receiving gender reassignment surgery in Europe. After Jorgensen became famous, she became an advocate for other transgender people.

‍Virginia Prince lived in San Francisco during the 1940s. Her efforts in developing an international network with whom she corresponded led to her work with Alfred Kinsey and other social scientists, along with the creation of a number of transgender publications. Her philosophy of “full personality expression” consisted of the belief that binary gender systems were harmful and limiting to both women and men.

‍The Erickson Educational Foundation provided information on transgender issues and funding to support transgender publications. Its founder, Reed Erickson was a transgender man who funded meetings that helped guide professionals who worked with transgender individuals. These activities led to the creation of the Harry Benjamin International Gender Dysphoria Association, which later became the World Professional Association for Transgender Health.

‍Sylvia Rivera was born as Ray Rivera and began living on the streets at a young age due to her family’s disapproval of her behaviour. After spending time working as a prostitute, she was taken in by drag queens in her local community. Sylvia Rivera was a prominent figure during the Stonewall Riots in 1969, which occurred after local police raided and arrested patrons of the Stonewall Inn. This event was the starting point of the gay rights movement entering the mainstream discourse. Today, Rivera is honoured in Greenwich Village by the naming of “Rivera Way” at the corner of Hudson and Christopher streets. These important transgender activists throughout history set the stage for many of today’s public transgender figures. Their stories highlight the long history of today’s transgender community and its efforts to achieve equal rights and recognition in today’s society.