Identifying The Difference Between Transgenderism And Cross-Dressing 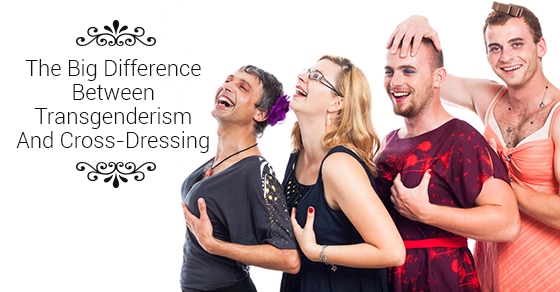 Many believe transgenderism and cross-dressing are exactly the same, but this couldn’t be further from fact.

Defining the terms ‘transgender’ and ‘cross-dresser’ are extremely complex but in this blog, we’re taking a look at their vast differences. When it comes to sex, gender, sexual orientation, etc., there are so many things to keep in mind, but how you identify shouldn’t be based on what society says is “right,” it should be based on how you feel.

The term transgender is used to describe a person whose gender identity is different from the one that they were born into or what is noted on their birth certificate. Transgender people do not believe that the sex they were assigned at birth and their gender identifies are the same.

It is such a delicate topic, but it must be dealt with using tact, respect and care. If you identify as trans, it is important to let others know how you would like to be referred to. If you have a person in your life who identifies as trans, you should speak with them when they are ready to discuss the transition, the terminology and the emotions that come along with this sensitive subject.

If you yourself are considering transitioning, it’s essential that you find a support system within your family, friends, co-workers, teachers, or even online connections so you have some to lean on throughout the process. While embracing your true gender is always a positive thing, there are challenges along the way that might require the emotional support of your circle.

For the most part, cross-dressers are usually heterosexual people who wear clothing traditional of the opposite sex.

The most common example of a crossdresser is a man who wears traditionally feminine clothing such as dresses or skirts. Depending on the person and situation, a cross-dresser may or not identify or associate themselves with the LGBTQ community.

As stated, studies show that generally cross-dresser identify as being heterosexual, but it is up to the person to decide how they identify; it’s not up to outside opinions. Crossdressing has played a part in some big name films, such as The Rocky Horror Picture Show, Mrs. Doubtfire and in the Tyler Perry Madea films to name a few, so it does have common place in our society.

Now you may be wondering, how do drag queens and kings fit into this equation? Well this is a good question. Although drag queens or drag kings dress in attire usually associated with the opposite sex, most performers identify within the LGBTQ community.

You should now be able to paint a clearer picture of the differences between the crossdressing and transgender community. Although they may be connected at some points, they are for the most part very different.