The History Of Top Surgery: Developments And Improvements 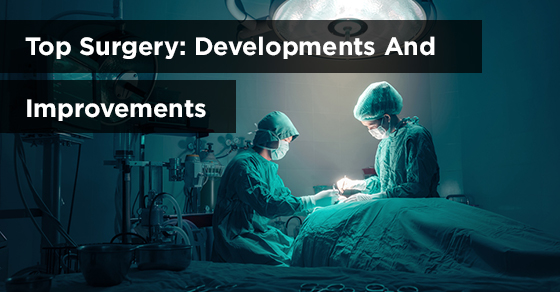 Breasts are a physical attribute associated with women. For trans men the double incision mastectomy, a type of top surgery, can eliminate the breasts and create a masculinized chest. This allows trans men to live comfortably in their own skin without feeling like there is feminine energy/characteristics hanging over them. Top surgery has come a long way since its inception. There have been new techniques and improvements that have made this surgery safer and easier on the patients as they recover.

Transgenderism, although it may seem like a new idea to some people who are unfamiliar with it, has a rich and complex history. The first gender confirmation surgery was said to have taken place in Berlin in 1912. Magnus Hirschfeld, a German physician and sexologist, actually coined the term “transexualism” in 1923. He also created the first medical gender clinic of the modern era.

In 1945, Sir Harold Gillies, often referred to as the “father of modern plastic surgery,” along with his colleague, Ralph Millard, performed the world’s first sex change. A young aristocrat named Michael Dillon was born with a female body but through the work of Gillies and Millard was able to live the rest of his life as the man he always knew he was.

In the 70s, trans men seeking double incision mastectomy were often turned away. Dr. Michael Brownstein, an American surgeon, started performing top surgeries around this time. He states that his colleagues were less than thrilled with his decision to help the transgender community. Brownstein felt that, as a surgeon, it was his duty to help people live and present themselves the way they wanted and to perform the surgeries without judgement.

David Yonkin, a psychotherapist practicing in New York, recalls hearing horror stories of patients trying to transition peacefully. They were shunned by hospital staff following their double incision mastectomy procedures, ignored when they asked for help, and given no instructions for aftercare leading to post-op infections. Furthermore, some patients endured botched surgeries, and revisions were not offered as a corrective option.

As the 90s came to a close and a new decade was ushered in, top surgery became more and more acceptable. Hospitals were more caring towards patients and there were less cases of botched surgeries. Back in the day, a patient would need to remain in the hospital for many days following their surgery. Nowadays, the procedure is completed in a day, and patients are allowed to recuperate in their own homes. Moreover, patients are given ample aftercare instructions, and their surgeons schedule follow-up consultations to ensure that everything went right with the procedure.

Top surgery has come a long way. With safe techniques and qualified surgeons performing the procedure, the trans community is finally in good hands.