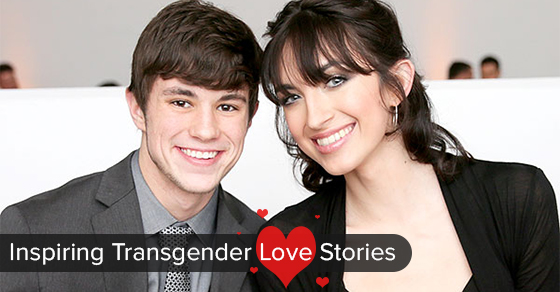 In this article, we’re highlighting four transgender love stories to inspire and encourage.

Arin Andrews and Katie Hill became widely known across the internet when their love story was disseminated to millions in 2015. The couple met in 2012 while they were both going through the gender transition process and spent their initial months together celebrating their courtship while discussing the highs and lows of the transition process online. The couple’s videos have become an inspiration to millions and they’re now making a new documentary about their relationship.

After meeting at a ball, Janai and Sean Coleman instantly fell in love with one another. Janai has said she felt her world stop the moment she saw Sean. It took her two days to work up the courage to message him on Facebook after the event, and then when Sean replied, they began a whirlwind romance that led to their marriage just a few months later. The couple have since become known for helping other transgendered people identify and overcome the challenges they face within their daily lives.

D’Jamel and Leiomy are widely renowned throughout the online community for their mesmerizing photos and captivating personalities. D’Jamel is known for his outstanding acting work and has been listed as one of the leading up and coming trans actors among many online publications. Leiomy is an international renowned choreographer, who has worked with leading dance groups throughout the U.S. and internationally. Their love story has been featured across the online community and they continue to inspire millions both as individuals and as a couple.

Michelle Austin and Dicky Johnson are known for their adult film titles, the first of their kind within the trans community. The couple’s films explore the sexuality of trans couples and of the love and connection that trans couples can share with one another. The couple’s shared adoration of one another is clear within interviews and within their films, which help educate within and beyond the trans community on what it means to be sexual as a trans person.

By learning more about the couples featured in this article, you can see the great strides the trans community is making in building bridges and driving understanding across online platforms. To discover more about the FTM process, speak with our team today!