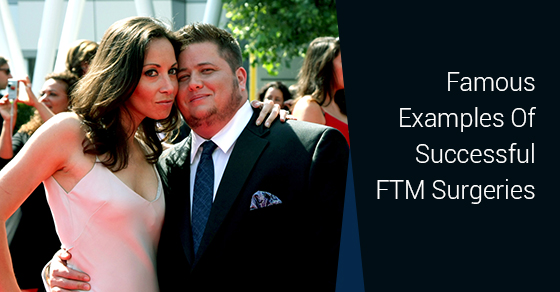 While many great examples of successful FTM surgeries remain unsung heroes for FTM patients, there are a few people who have sat in the spotlight.

It’s natural to approach FTM surgery timidly as it’s a major life decision. However having inspiring role models and good examples of how FTM surgery can improve your life and confidence often puts minds at ease.Here, we take a look at some of the most inspirational FTM transformations.

Sonny and Cher’s son Chaz underwent transition in 2008. Unlike most transitions, this was a very public process.Bono talked about his journey in articles, on talk shows and on his website. After surgery, he appeared on the TV show Dancing with the Stars. This was the first time that an openly transgender man had ever starred on a major network show and was a step forward for trans people everywhere.Chaz Bono’s courage is inspiring, but so is the success of his surgery. Recent paparazzi shows have shown Bono looking very masculine and, even better, in his book Transition, he claims that the transition has brought him to a place of peace and happiness that he has never known before and that the change was accepted by his family and friends.Bono is a perfect example of how successful FTM surgery can help a person become his true self and find joy and love.Thomas Beatie made news as the first transgender man in a traditional marriage who gave birth, earning him the nickname the ‘pregnant man.’ His story is very sweet. Although he and his longtime wife wanted to have children, his wife was infertile. Instead, Beatie chose to become pregnant, giving birth to three beautiful children in succession.Beatie’s story came to national light when he wrote about the problems he had finding an OBGYN who would take a man as a client. Fortunately, after his story went national, he received many offers from doctors who would not let prejudice get in the way of delivering a child.Beatie has since written about the experience, offering advice to men in similar situations.Loren Cameron is a man who underwent transition surgery in the late 70’s. Besides upholding a near perfect physique, Cameron is also a great activist for the community.Cameron has produced many photo exhibitions of transgender persons, in his words trying to “demystify” their bodies for the non-transgender audience. Cameron’s life and work show the world how normal and beautiful transgender people are.Ian Harvie is an awesome stand-up comedian who rubs elbows with the best in the business. Even better, Harvie is open about his transition, often using it as a source of material in his routine.Harvie’s transition was seamless. He is a handsome bearded man with a smile that shows great confidence in the choices he has made. He shows that whether you want to go up on stage or just pass in your day-to-day life, FTM surgery can make you look as handsome and masculine as you are inside.

is a former German Olympic pole vaulter from Ulm, a small city situated on the River Danube. Buschbaum was featured in

episode. In the episode,

Buschbaum expresses that he was born in the wrong body

, stating, “I had always had the feeling, even before my puberty, that my penis was missing. I can’t describe it any other way.” After a series of injuries sustained from his athletic career – predominantly, a ruptured Achilles tendon – Buschbaum announced in 2007 that he was retiring.

Soon after, in 2008, he made his life-changing decision to transition

. Although his career as an Olympic pole vaulter ceased, Buschbaum was embarking on a new, deeply personal journey of self-discovery. In addition to having top surgery, Buschbaum underwent phalloplasty surgery. Now a celebrity in Germany, Buschbaum is a successful author and provides coaching and sports consulting services.Lucas Silveira is a Canadian musician and made history in 2006 when he became the

first transgender man to be signed to a major record label

. He is the lead singer and guitarist in the rock band The Cliks.Silveira had top surgery and underwent hormone replacement therapy in 2010.

He was hesitant when he began testosterone therapy

, as he was worried the deepening of his voice might destroy his career. He consulted with many professionals, including doctors, and other transgender man vocalists who transitioned successfully.

, “I’m transgender by definition, but not by identity. I don’t really want to be called a transgender person or a trans man because I feel like it’s becoming more of a political identity than a personal one.”Born in the San Fernando Valley area of Los Angeles, California, Buck Angel is an American transgender man famous for his career as a adult film producer and motivational speaker. He is the founder of Buck Angel Entertainment, a media production company.Angel serves on

Board of Directors of the Woodhull Sexual Freedom Alliance

, a foundation whose mission is to affirm sexual freedom as a fundamental human right. He also works as an advocate, educator, lecturer and writer.He was the first transgender man to appear in the adult entertainment world. Angel has been featured in a vast variety of media and has made appearances on the

Tyra Banks and Howard Stern shows, as well as at IdeaCity and Yale University

.American transgender man Robert Eads was the subject of the

award-winning documentary that documents his life and death, Southern Comfort

. Eads made his transition later than most people do and, because of his age, surgical sex assignment to male genitalia was deemed inadvisable.In 1996, it was found that he had ovarian cancer, and more than a dozen doctors turned him down for treatment. When he was finally accepted for treatment over a year later, the cancer had already spread to other parts of the body and he died on January 17, 1999.“I wish I could understand why they did what they did, why they had to feel that way...And I know in a way they’ve contributed to my dying here. But I can’t hate them. I don’t hate them. I feel sorry for them...What makes me most sad is they probably felt like they did the right thing,”  Eads states in Southern Comfort.After Eads’ death in 1999, his partner Lola started the

to provide transgender men with free lower exams and consultations.