What The Danish Girl Means For The Trans Community 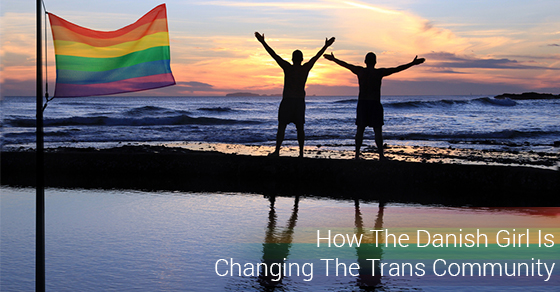 The 2015 film “The Danish Girl,” directed by Tom Hooper is stirring a bit of controversy, as well as Oscar buzz. The film is based on a real-life story that happened about a century ago, revolving around a painter called Lili Elbe (born Einar Wegener), who is among the first people on record to have undergone gender reassignment surgery, together with her wife and painter, the conflicted but loving Gerda Wegener.

Lili and Gerda were real people, though the film draws from the novel about the story of their lives, and while the artistic license provides for a compassionate representation of their journey, there are certain scenes that are hard to watch, yet unfortunately relatable for many trans people. In one particular scene, Lili is brutally beaten by two anonymous men in a park, and in another doctors try to diagnose Lili as mentally ill, however outside of these instances the character does receive support from her friends and family.Surrounded by these supporting people, her transition does not seem controversial, which is not historically accurate, though it invites the audience to view it and react in the same light. As such, Lili’s transition is not the main conflict, but rather the context for her love story with her wife, Gerda (referred to as Danish girl).When the two finally meet a supportive doctor, Lili explains that she feels like a woman inside, to which Gerda responds that she believes it too, which is quite an emotional scene. This is particularly so when you consider how the medical community and society reacted to her desire to transition, as well as the physical assault by doctors and transphobic Parisians alike throughout the film.

‍Though the film is based on events that took place in the early twentieth century, it feels connected to the present, and doesn’t give the impression of a costume or period drama. It is very timely as it reveals how slowly the world has embraced the transgender case, and the struggles that the transgender community faces on a daily basis.In fact, just several years ago, this film would have been considered hard to make, cast, or finance. But now its timing seems perfect, with some people using the word zeitgeist.Still, its success could be attributed to extraordinary performances by openly transgender people, like Laverne Cox in “Transparent” or “Orange is the New Black,” or the fact that Caitlyn shared her story with so much candour, resulting in trans narrative acceptance in mainstream culture.In a way, this could be seen as a sign of hope that the pace of change is accelerating, and that the issue of discrimination will soon be a thing of the past.