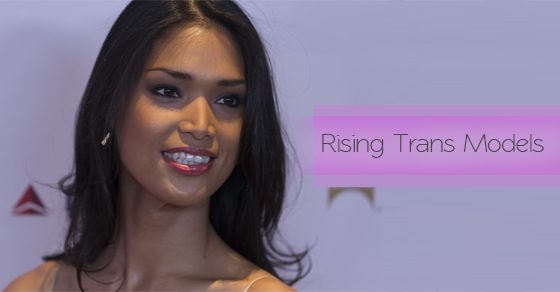 The faces of the models we see on the catwalks of Milan and Paris are changing, as is how we define beauty. Transgendered models are now taking their place at the elite fashion events for the leading designers, as they give hope to millions of people worldwide.

In this latest article, we’ll take a look at five of the leading transgendered models within the current generation.

The Brazilian-born, Italian-raised model has quickly become one of the most widely recognized faces within the modeling industry worldwide. She is one of the top models in Italy and was recently highlighted for her role in the industry by Forbes magazine who named Lea T as “One of the 12 women who have changed fashion.”  Australian Andreja Pejic was discovered on her 17th birthday, while working at McDonalds. She has since become an overnight sensation in Australia, where her looks have impressed millions and been highlighted across magazines and advertising campaigns. She has now graced the catwalks around the world for designers such as Jean Paul Gaultier and Marc Jacobs. Pejic is also now planning a documentary to trace her experiences in the modeling industry and as a trans woman in today’s society.Geena Rocero came out as transgendered in a TED talk in 2014. She had previously spent 12 years as a swimsuit model working for the leading designers across the United States after arriving in the country from the Phillipines. Rocero has since become a role model to millions worldwide and recently launched the organization Gender Proud, which stands up for the rights of transgendered people around the globe.Aydian Dowling shot to prominence in 2014 when he was named Men’s Health magazine’s next cover star. As a transgendered man, Aydian has overcome many obstacles in his life and has recently received significant media attention after appearing on the Ellen television show to discuss his life and his journey.Carmen Carrera first gained fame as a contestant on RuPaul’s drag race. She has since become more involved in the fashion industry, after she was photographed for W magazine. She has also made appearances on TLC and ABC, and has become a renowned activist for the transgendered community, working to help support transgendered people across the U.S. and to support laws offering greater protection for transgendered men and women.

The fashion industry is now becoming more welcoming to transgender models from around the world. And we’re seeing this change throughout our everyday lives, as well as in fashion shows and on magazine covers. While there are many more steps forward to be made for the transgendered community, those highlighted in this article are now role models for future generations! To learn more on this topic, speak with our expert team today!