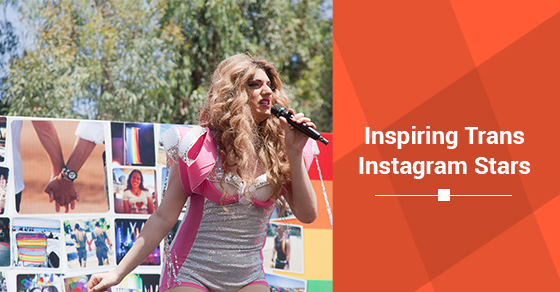 The inclusive social landscape in modern-day America must be a breath of fresh air for the LGBT community, though the uphill journey for transgender people remains the toughest among the LGBT people. The trans conversation has been particularly loud in recent years with the attention given to Laverne Cox and Caitlyn Jenner, bringing to light the violence directed towards trans women.

The situation is not much different for trans men, who often suffer self-inflicted violence and verbal abuse from others. This is all the more reason why it’s so important to find an LGBT community to support you through your transition. LGBT groups by nature are understanding, welcoming, supporting and ultimately helpful, as one of the best ways to change the mindset of people is by actively participating in relevant conversations.

Social media remains one of the best ways to easily engage with LGBT people around the world. The following are some FTM Instagram stars you may like to follow for daily inspiration:

The 19 year old trans Asian college student shared his transitioning story in Miley Cyrus’ Happy Hippie #InstaPride Campaign. Sheng no longer feels the need to hide anything about himself when in public, and has felt free ever since he woke up from top surgery.

In an Instagram caption, Leo says that he has multiple identities beyond his gender, including filmmaker, photographer, writer, feminist, public speaker, and social media addict. This inspires other trans to look beyond their gender and develop passions they can associate with.

Miley’s date to the 2015 amFaR Inspiration Gala, Tyler is a 24 year old living in NYC who can best be described as a queer, biracial, agender person. He struggled for years trying to figure out which of the “two” genders he belonged to, but is now comfortable and content expressing himself as he is. This goes to show that you don’t have to fit yourself in a box that will never contain you.

Aydian is an FTM transgender activist who has openly shared his story on YouTube to inspire other trans, and has accomplished quite a lot, including making an appearance on “Ellen”, participating in the Ultimate “Men’s Health” Guy Search – making him the first ever transsexual man to grace the cover of Men’s Health, and starting his own transgender stealth style clothing company (Point5cc). His Instagram gives you a genuine look into how life can be four+ years after starting Testosterone.

Dellan is a personal trainer who has a trans boyfriend, Joey, at his side. The aboriginal gay and FTM trainer and his partner share their fitness journey and relationship to suggest just how normal your life can be after FTM.