3 Things For Trans People To Look Forward To In 2016 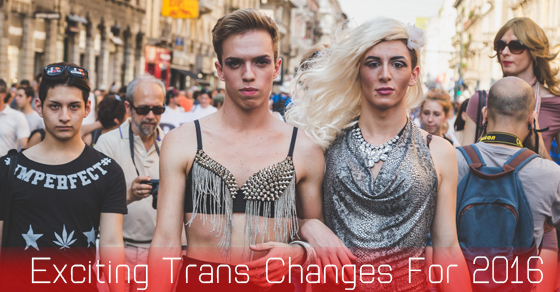 The transgender community has suffered significantly in recent years as widespread discrimination has prevented trans people from moving forward within their lives and in achieving their personal objectives, but with the New Year arriving shortly, 2016 promises to be a standout year for transgender rights. In this article, we highlight three things trans people can look forward to in 2016.

Starting in 2016, Ontario residents will be able to receive referrals for gender reassignment surgery through all qualified healthcare providers.Currently, Ontarians can only receive a referral through the Gender Identity Clinic program at the Addiction and Mental Health Clinic in Toronto. This expanded referral system will allow transgendered people across the province to reduce the cost of their gender reassignment surgery and to undergo the surgery within a reduced timeframe.

In November 2015, the Alberta provincial governmental created legislation to make it illegal for businesses and other service providers to discriminate on the basis of gender identity and gender expression.The law has yet to be passed, but it’s expected to move forward and become law in 2016. This will ensure that transgendered people across Alberta join others in Ontario, Nova Scotia, PEI, and Newfoundland and Labrador in being protected against discriminatory policies. It promises to be a significant step for transgender rights in Canada and a flagship moment for the Alberta transgender community.There are many important steps forward for the transgender community to make in 2016! With new laws being passed to protect their rights and new ideas being presented to help support their future needs, communities are rising to ensure transgendered people have the same rights we all share.To discover more on this topic, speak with our team today.