11 Best Quotes For The LGBT Community 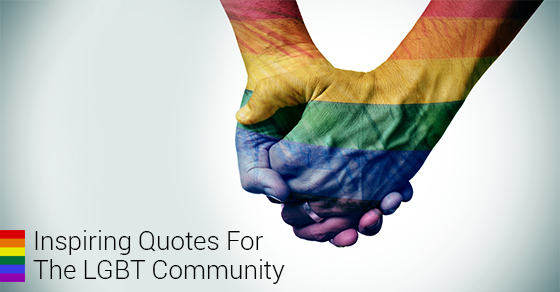 Quoting the US President Barack Obama when he officially made June the National LGBT Pride Month in the US: “All people deserve to live with dignity and respect, free from fear and violence, and protected against discrimination, regardless of their gender identity or sexual orientation.”

There is a need to raise awareness about gays, lesbians, bisexuals, and transgender people while fighting prejudice all over the world, and LGBT quotes from changemakers play a vital role in the movement for equality.Here are some of the best and most powerful quotes for the LGBT community:

“What is straight?  A line can be straight, or a street, but the human heart, oh no, it's curved like a road through mountains.” “In itself, homosexuality is as limiting as heterosexuality: The ideal should be to be capable of loving a woman or a man; either, a human being, without feeling fear, restraint or obligation.” “Only the human mind invents categories and tries to force facts into separated pigeon-holes. The living world is a continuum in each and every one of its aspects. The sooner we learn this concerning sexual behaviour the sooner we shall reach a sound understanding of the realities of sex.” “Understand that sexuality is as wide as the sea. Understand that your morality is not law. Understand that we are you. Understand that if we decide to have sex whether safe, safer, or unsafe, it is our decision, and you have no rights in our lovemaking.” "Why is it that, as a culture, we are more comfortable seeing two men holding guns than holding hands?" "I believe that no one should ever have to choose between a career we love and living our lives with authenticity and integrity" "The beauty of standing up for your rights is others see you standing and stand up as well." “Openness may not completely disarm prejudice, but it’s a good place to start." “Marriage should be between a spouse and a spouse, not a gender and a gender." “At some point in our lifetime, gay marriage won’t be an issue, and everyone who stood against this civil right will look as outdated as George Wallace standing on the school steps keeping James Hood from entering the University of Alabama because he was black."